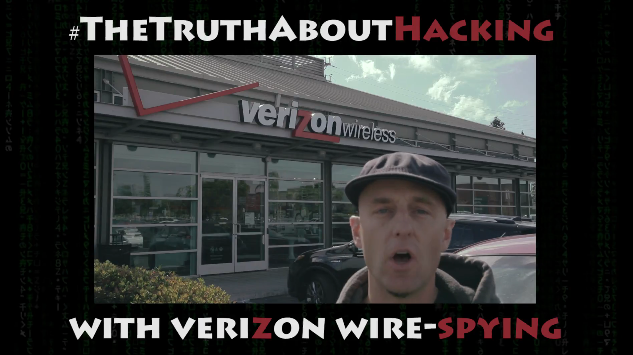 Please help share and spread the word I am launching  TheTruthAboutHacking.com  because Verizon Wireless aka “Verizon Communications Inc.”, actually enabled someone unauthorized to access and change my account information. Once the hackers were allowed access to my account they removed my iPhone from the number and added a new device, and then from there they were able to reset my passwords and access 3 different emails, in a failed attempt to get in my GoDaddy account. This is where I have several business assets, and proprietary content for both clients and business partners. Verizon is not the hackers, but I have evidence and confirmation from them directly that they are the ones who enabled the third party (But they won’t tell me why or how), and they won’t release the phone records, device i.p., or location, which means that are actually aiding and abetting the hackers – i can’t understand this? Please help me spread the word and find an attorney.

Below is the footage from my live stream the night it happened when I went to the Verizon store and I was still trying to figure out what was going on. People have been getting the two videos confused. The one above was recently filmed on May 6, 2017 outside of Verizon store in Venice Beach. I have to go there just to talk about my account because my account was flagged due to the hacking, they know exactly what happened and still won’t release the information. The one below is from January the night i was hacked.

Yesterday in response to my post about this situation… a long time friend, and person i consider a brother of mine from back in the gap- Ben, came at me sideways and trolled my post. He tried to say I was/ am making a big deal out of nothing and cast all kinds of assumptions about whether the hacking was even “real” or not. He erroneously claimed in conversation that I claimed “Verizon is the one who hacked me”, which is not ever what i Said. I said Verizon enabled them to hack me and is now covering their tracks and won’t release the files to me (because they are liable for any damages or loss). Furthermore, Ben tried to say that I am bringing this on myself because “I am political” (wtf?), and that I should just “be the old me”, the me he know from 20 years ago man i don’t know what this world is coming to can anyone help me out with suggestions, directions, support, or legal? Keep you updated here on the #TruthAboutHacking #Hacking