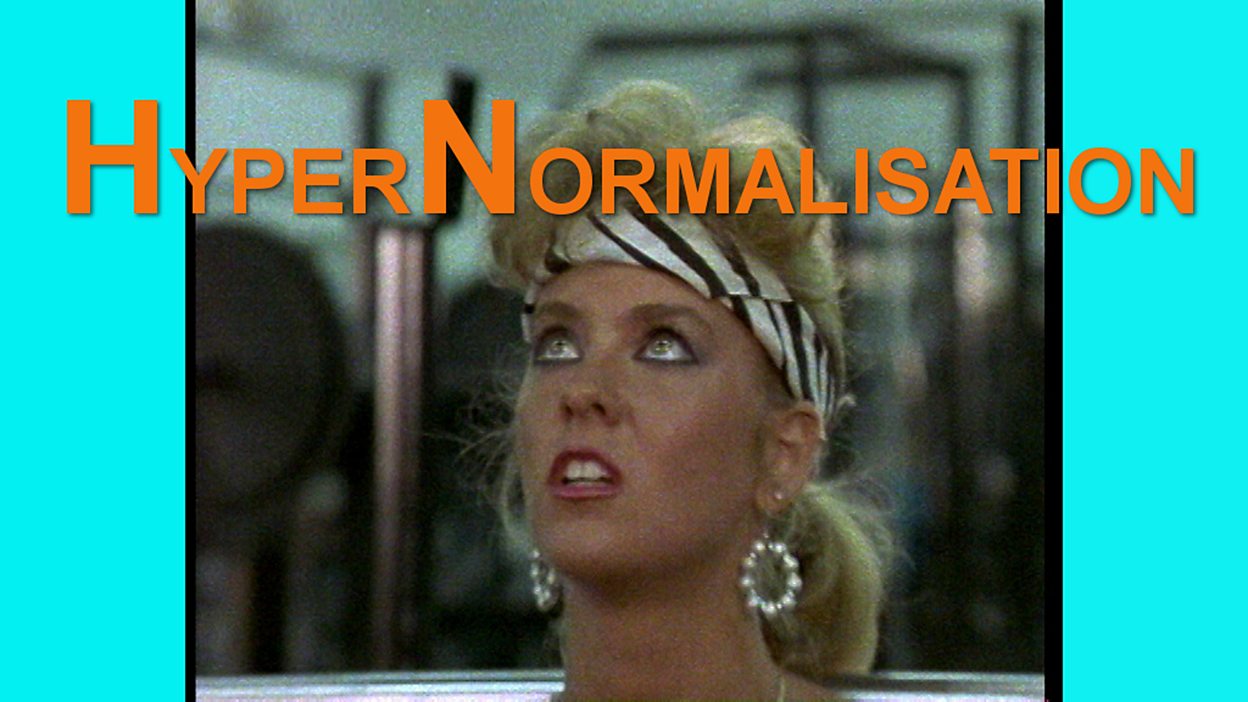 Last night on the 5 hour return from San Quentin to Los Angeles, I had time to watch the 2 and 1/2 hour BBC documentary “HyperNormalisation” (2016), by British Filmmaker Adam Curtis.  The premise of the doc is that much of the perceived chaos and uncertainty happening in the world today is guided by the unseen hand of corporations and the bank- while political organization has retreated into the “fake” world of individualism and cyberspace.

Curtis narrates a timeline from 1975 up to the present where he draws on parallels between different events such as the rise of Donald Trump and “surprise of Brexit”, alongside the ever escalating War in Syria, international refugee crisis, and some of the various high profile terrorists attacks going back to the Iranian revolution. I am linking the video below for those who are interested in watching it, and then i was going to share some of my thoughts.

Hypernormalization is long but worth the watch to re think the insanity of sectarian conflict and the U.S./ European meddling in the Middle East. There is a gang of insight into the mind of Henry Kissinger and the U.S. invasion of Iraq.  Curtis talks about a new era of suicide bombings that emerged from the Khomeini revolution and growth of Hezbollah, and how the tactics of this evolution became then used from the Sunni / Hamas side of the battle – but does not offer the much deeper historical context of the Sunni/ Shia divide in general. The documentary also fails at thinking universally about the ways in which the European colonial nations and the West employed the “divide and conquer” techniques (described of Kissinger in the Middle East), in Africa, and Native North and South America from the time of colonization to the present.

It’s interesting a British filmmaker failed to contextualize the relevance of the Iranian revolution to that of Britain’s oil exploits – which would have preceded Syria’s plans of uniting the Arab world.  The context of Sarkov in Russia to that of Putin and Kremlin’s propaganda machine is an integral part of understanding the dissatisfaction and ultimate pessimism that runs in modern political movements. There are other factors that were left out in terms of alternative modules of community and economy, and the ways in which we can form a new and better world.

Ultimately, the documentary was insightful but just a starting point at looking into the craziness we are witnessing in the world today. The filmmaker doesn’t leave the viewer with much room for Hope or Optimism- and in a way it becomes a self fulfilling prophecy- by pulling the viewing audience into the disconnected virtual world of “theory” and an echo chamber of the internet “alternative news” community. What should we get from this understanding of these events and actors?

There is a lot more I can write on this review but will cut it short until I have the opportunity to watch it again. . . Another thing I wanted to add is that Curtis should have tied in the context to the long drawn out war / confrontation in Syria with “The 7 Islamic countries that were targeted for regime change” ** General Wesley Clarke in October 2007 at the Commonwealth Club in California,

as well as a must read “The Grand Chessboard: American Primacy and Its Geostrategic Imperatives by Zbigniew Brzezinski where he proposed that “no Eurasian challenger should emerge capable of dominating Eurasia and thus also of challenging America’s pre-eminence” . There is no context for the Left in Latin America or that of Fidel Castro support of nations fighting against U.S. imperialism in Africa and Gadaffi’s plan of a United States of Africa, including the real reason why he was targeted for regime change in his efforts to fulfill Marcus Garvey’s dream of a ** United States and Bank of Africa The African Unity Summit

** Great YouTube page with several of the videos and source material referenced;  https://www.youtube.com/channel/UCAWxZyfEPejhGJv8Z4wbKBw